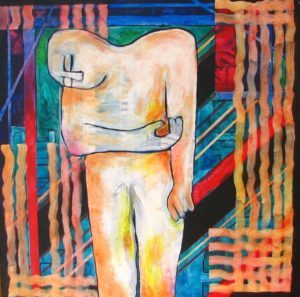 These four paintings are from a series of 50 canvases created between 2013 and 2016. The paintings are all square, 30” x 30”, done in acrylic. Over the years I have developed my own approach to painting. I simply paint without a plan for the final image, applying layers of transparent color and changing the developing forms intuitively until I achieve a result that coheres. Back in the 1970s when I began painting, I painted in watercolor, and my approach to acrylic is an extension of what I learned in that medium. Watercolor demands immediacy and freshness. In acrylic, I can paint out and revise whole sections as I progress. I feel a sense of satisfaction as the painting’s layers deepen. This satisfaction perhaps mirrors a deeply held belief in the complexity of our connection to others and to the world. 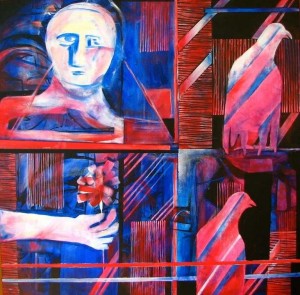 I’ve always been convinced that the boundary between inside and outside ourselves is much more porous than we choose to acknowledge. I often find my “subjects” indistinguishable from the environment around them. This isn’t a game or a political statement, but rather the way I see. 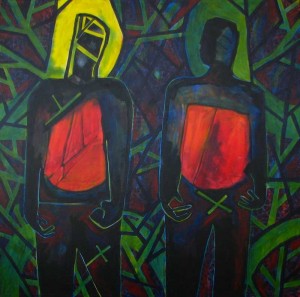 In Heartbeat, for instance, a startling green dominates the painting. The two figures emerge as part of the green web. Heartbeat can be seen as a commentary on human connection with this natural world, but that meaning came later. In the actual putting down of paint, I was instead seeking a sense of rightness, of balance among the chaos of the painting’s elements. Each painting is a problem to solve, but the answer isn’t just a technical solution.

The painting is finished when all the forces in the work find balance and cohere. In most instances, I resist the “meaning” of the painting until the end. I know the titles express something inherent in the work, yet for me, the process itself is what drives me toward any meaning that may arise. It’s my way of enacting the intelligence that lies at the heart of the world’s unfolding. 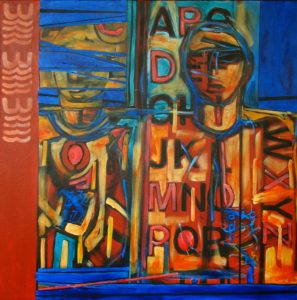 For questions about exhibiting Fifty Paintings, send a note to Jeri via the contact page.