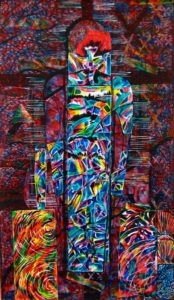 For years, I’d been involved with the human figure and various permutations of that theme. Though I’d made some forays into landscape, these were never really serious. I was never interested in plein aire painting or in depicting a particular place at a certain time of day. But I was interested in the richness of the world. I see human beings in an intense energy field. Things are passing through that space filled with objects, living bodies, inert stuff, and even atomic and sub-atomic particles. We live in a place that is much more alive, much more active, than we like to think about.

I always saw the world in this rich and complex way from the time of my childhood.  Paintings are a reduction of the world, somehow a simplification. You can’t paint what you see, feel, recognize, and even hear all at once. But what if I tried to convey something about that richness, even overload of experience, in a painting? In these works, I felt myself pushing those boundaries. I needed to say something more about what I see and what I experience, and I couldn’t do this by a literal or photographic depiction rooted in time and space. I had to show the energy. 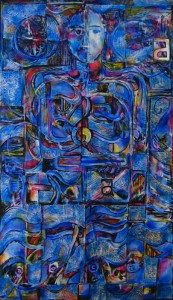 These works in Regions of Identity make an attempt to embody a lived life that is not fixed—that is in motion, moving through time, impacting and being impacted. The title expresses that concept. We are never really any one person. We live in a region of identity, a place where, as individuals, we are always becoming, relating, and absorbing. It’s very difficult to believe that a fixed image, a painting, could embody that kind of thinking but that’s actually what I’ve tried to achieve here. 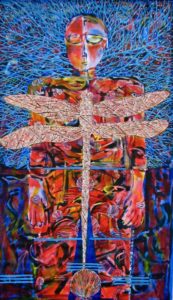 Usually, I know exactly when a painting is finished. The elements come together inside the frame. There’s an aesthetic sense for me that nothing more can be done. But with these paintings, it was different. There’s a lot of striving in these images to exceed the frame and to go beyond the edge of the canvas. Of course, that’s impossible. Only the viewer’s mind can extend beyond that boundary and maybe that’s pretty much the whole point. In these works, I pretty much had to say: Well, I’ve gone as far as I can with this. I suppose it was kind of defeat, but when I viewed the final paintings in succession, I also realized that, in itself, the defeat was also a form of victory. The images force me into a mental extension. The paradox here is that, while the image is certainly confined, for me it also persists and attempts to fill the space around it. I think that’s a pretty profound effort.

Related to this series is a series of ten paintings (30″ X 40″) entitled Offerings, Blessings, Prophecies that extends some of the efforts of Regions. The combined twenty-two paintings form a whole and would make a strong statement in any gallery space. 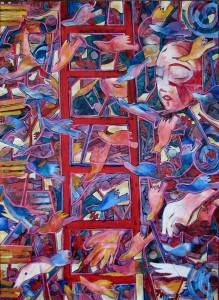 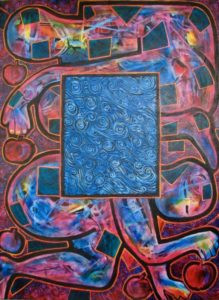 For questions about exhibiting Regions of Identity, send a note to Jeri via the contact page.

In Regions of Identity, I found my “subjects” sometimes indistinguishable from the environment around them. I’ve always been convinced that the boundary between inside and outside ourselves is much more porous than we choose to acknowledge. What is my self? What is you? I found the symbolic expression of this in these paintings.

In Offerings, Blessings, Prophecies I gave myself wholly over to that vision of the world. The images in the later paintings barely congeal. They demand active participation from the viewer, since below the surface, behind the patterns, are secrets that can only be penetrated by acts of faith.

For further information, send a note to Jeri via the contact page.