With his Thirty-Six Views of Mount Fuji, Katsushika Hokusai, whose prints are currently on exhibit at Boston’s Museum of Fine Arts, seems to reinvent the very idea of point of view over and over again. He must have traveled widely to have actually seen the fabled mountain from so many different vantage points. There’s no formula—each is a fresh take. Often the mountain is seen in terms of some human activity, as though watching over the people who fish, harvest, and make the things they need to live. In other images, Fuji is merely itself, framed by trees, overlooking water. The mountain can be close or very far away.

Most famous of the views is Hokusai’s iconic image Under the Wave Off Kanagawa, also known as The Great Wave. Fuji sits beneath the breaking wave, a massive wall of water turning on itself with white anthropomorphic fingers that seem to clutch at the small boats loaded with humans attempting a passage across a tempestuous ocean.

Most of the world is familiar with The Great Wave. Seen frequently in reproduction, in media, in advertising, and used on personal products from totes to umbrellas, the image has journeyed far from its source. This is a small work, measured in inches not feet. Here we have this massive rogue wave, possibly even a tsunami, spiraling, rising, threatening the small, precarious boats that seem to represent human endeavor in the face of huge natural forces.

Beneath the wave, in a circle framed by its curve, we see the perfect cone of Fuji, a sleeping volcano—implacable, unmovable, and holy—a form that, like the wave itself, suggests the purity of geometry and mathematical certainty. While the wave is ephemeral—we know that its presence is momentary: it will rise, crash, and return to the sea—the mountain hunkers down like a rounded pyramid.

Perhaps Hokusai deliberately planned this contrast, but I think it’s just as likely that, for him, it was simply one more view of the mountain, another inventive way of seeing his subject. The ideas about it probably came later. They are our ideas and not his.

Hokusai was a journeyman printmaker, a commercial artist really, bent on making a living in an era when these printed pictures sold for the equivalent of a bowl of noodles. Yet he lived in a time when the printed image was far less common than it is now. People were not inundated by images. In his massive output of prints, paintings, game boards, and banners, Hokusai manages to capture so much more than we can possibly take in—humans, animals, landscape, work, leisure, theater, story—few modern artists could claim to have so much breadth or humility.

A favorite image of mine from the exhibition is Carp That Climb the Waterfall. It has some of the qualities of The Great Wave—a sense of the force of the falling water and the fish struggling upward, fighting the current. We don’t know if the effort will result in success or failure, just as we can’t say whether the great wave will drown the tiny humans in the boats or allow them to survive. There is in these images a sense of the precariousness of life and also its liveliness and unpredictability. That takes us back to Fuji, the seemingly eternal rock, something dependable, out there in the distance, ineffable but perhaps reachable, if only one could find the right point of view! 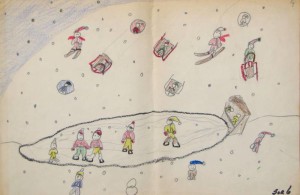 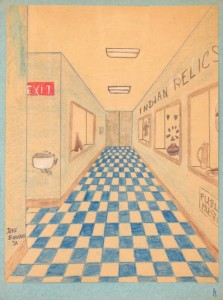 I dream often of my maternal grandmother’s house. This has been going on for years. Often I’m trying to return there. Sometimes I’m fixing it up or planning to buy back the place. The house itself is long gone, probably torn down years ago. But in my dreams, it remains alive—a place that changes its guise often but always with a few features of the original place.

It was, to say the least, an unassuming house. My grandparents were poor. They lived from the garden and by my grandfather’s job as a worker at the local paper mill in a small town fifty miles south of Lake Superior. The northern winters were extremely cold. The house had no central heat nor even a fireplace or woodstove, only an oil-burning stove in the dining room between the kitchen and the small living room. Every morning, my grandfather would get up to light the stove. For me, in the dream world, that small flame at the center of the poor house has become symbolic.

Just two nights ago, the dream returned. I was working on fixing up the place because I planned to spend the winter there. I felt the challenge of surviving the cold. I felt very strongly that this was the only way to nurture my creativity. I would go there. Something would happen. I would paint. I would make images. But it would be more than this. The vision would come to me. It would be a form of fasting and waiting for that.

It may be true that the old oil burner is the inner source of my artistic fire—something you light every day, something you depend on but have to work at, nurture, and feed. There is something in my background, in my psyche, in my body, that is about poverty and then about that process—making things out of almost nothing, living close to the bone with whatever is available. I practice this frugality in my kitchen. I never throw anything away, as there is always the possibility for morphing it into something else, something better, something new.

I believe in making do with essentials and in crying for a vision in an environment that, for all its bleakness, is still lit by an inner fire. While some artists may seek out sunny climes, I’m a winter person. I need that sense of darkness, of silence, of whiteness. It’s the beginning for me. It’s the place where I make drawings in black and white. Winter also provides me with the blank canvas that literally imbues itself with the colors of my heart and my soul. Spring and sun always follow. It’s a rhythm that I need and crave.