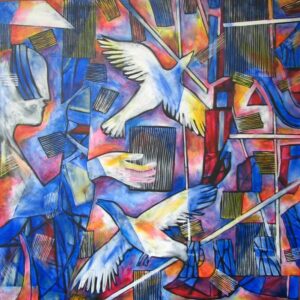 Cathedral belongs to a series of paintings I’ve been working on for the last year or so. These 20 images on canvases measuring 30″ x 30″ had their genesis in sketches I made at the Asian Civilization Museum in Singapore in 2013. As I’ve worked on them, the original images have either come forward or have been destroyed and transformed.

I always work on many paintings at one time—usually at least 10 or 12—because the solutions to different problems resonate and reverberate among them. Also, my method in acrylic is to achieve depth by layering patterns and transparent layers of color. The earliest renderings and markings recede and are gradually replaced. Sometimes I block out whole areas of a painting with either white or black, retaining only the parts that feel alive to me or somehow right. Then I move on from there.

In the end, each of the works is a synthesis of influences. I might marry one of Matisse’s color schemes with a sketch of an Indonesian shadow puppet and then touch the work with a scattering of New England maple leaves observed on my morning walk. Medieval cathedrals involved a similar synthesis of ideas. The architects’ intention was to create a sacred space that embodied spiritual tenets. On a less grand scale, Cathedral is also about sacred space, color, and light. The birds of the imagination are released to fly freely. The ghostly figure touches light and air with extended fingers. Something happens. There’s a juncture . . . a moment that connects the material world with something ineffable and mysterious that seems worth investigating.

Reading “Crow Mountain” by Can Xue

Girl in a Red Dress