Jeri’s short video Hunting Arrowheads with My Father was selected for the 2021 Wildwood Film Festival, to be shown at a future date. 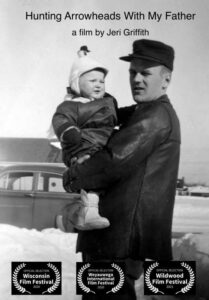 Hunting Arrowheads with My Father was selected for the 2020 Weyauwega International Film Festival, which opened November 11, 2020.

Hunting Arrowheads with My Father was selected for the Wisconsin Film Festival in Madison from April 2–9, 2020. Her film premiered as part of the festival’s “All in the Family: Wisconsin’s Own Shorts” on April 5, 2020.

The Chinese writer Can Xue used one of Jeri’s paintings, By the River, for the dust jacket image on her novel published in 2019. The book was on display with the painting at the Factory Mark Gallery in Framingham, MA. (See below.) 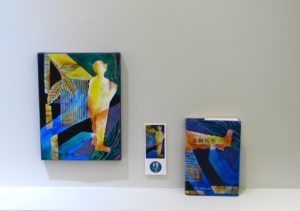 Can Xue novel (right with bookmark), dust jacket based on Jeri’s painting By the River (left)

Seventeen paintings in Jeri’s Relationship series were included in a show at Factory Mark Gallery in Framingham, MA in Fall 2019. Website information at this link. 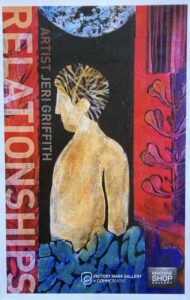 The Portland Review posted the paintings in Jeri’s Global Warming series to the magazine’s website on June 21, 2019.

Images from Jeri’s series The War Drawings appeared in The Carolina Quarterly 68, no. 1, Fall–Winter 2018.

RavensPerch posted five drawings from Jeri’s The Crow Series to their website on June 1, 2018.

The Adirondack Review chose images from Jeri’s series of drawings titled Histories to feature in their Summer 2018 issue.

See a portfolio of Jeri’s paintings illustrating an article by Nell Pach about Can Xue’s The Last Lover posted on the website for Music & Literature on October 4, 2014.

In 2014 and 2015, the Chinese writer Can Xue published books with Jeri’s paintings on the covers. Link to Can Xue site at MIT.